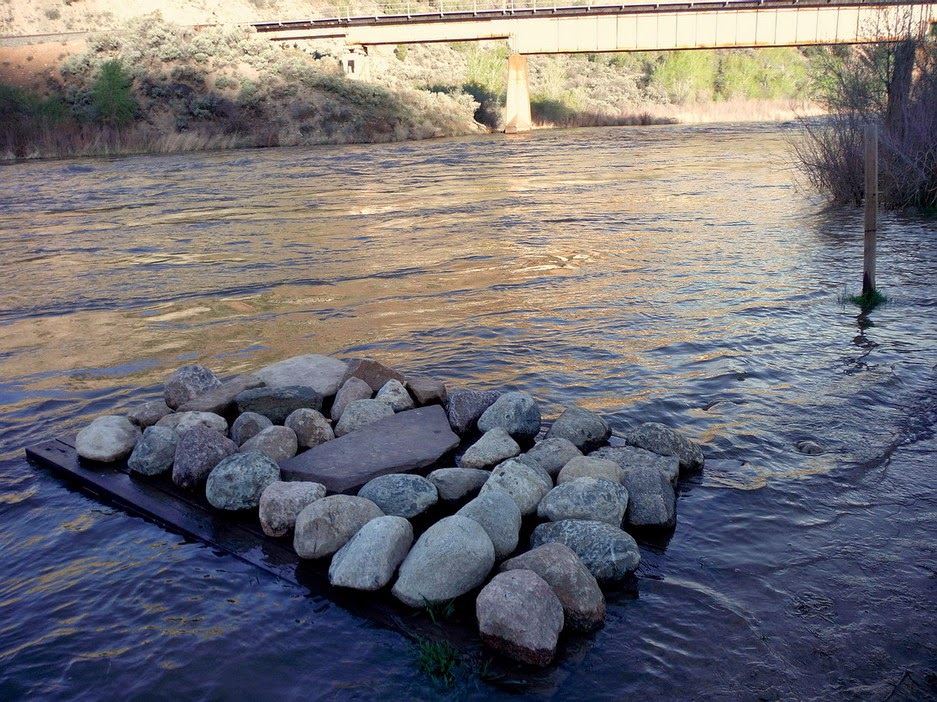 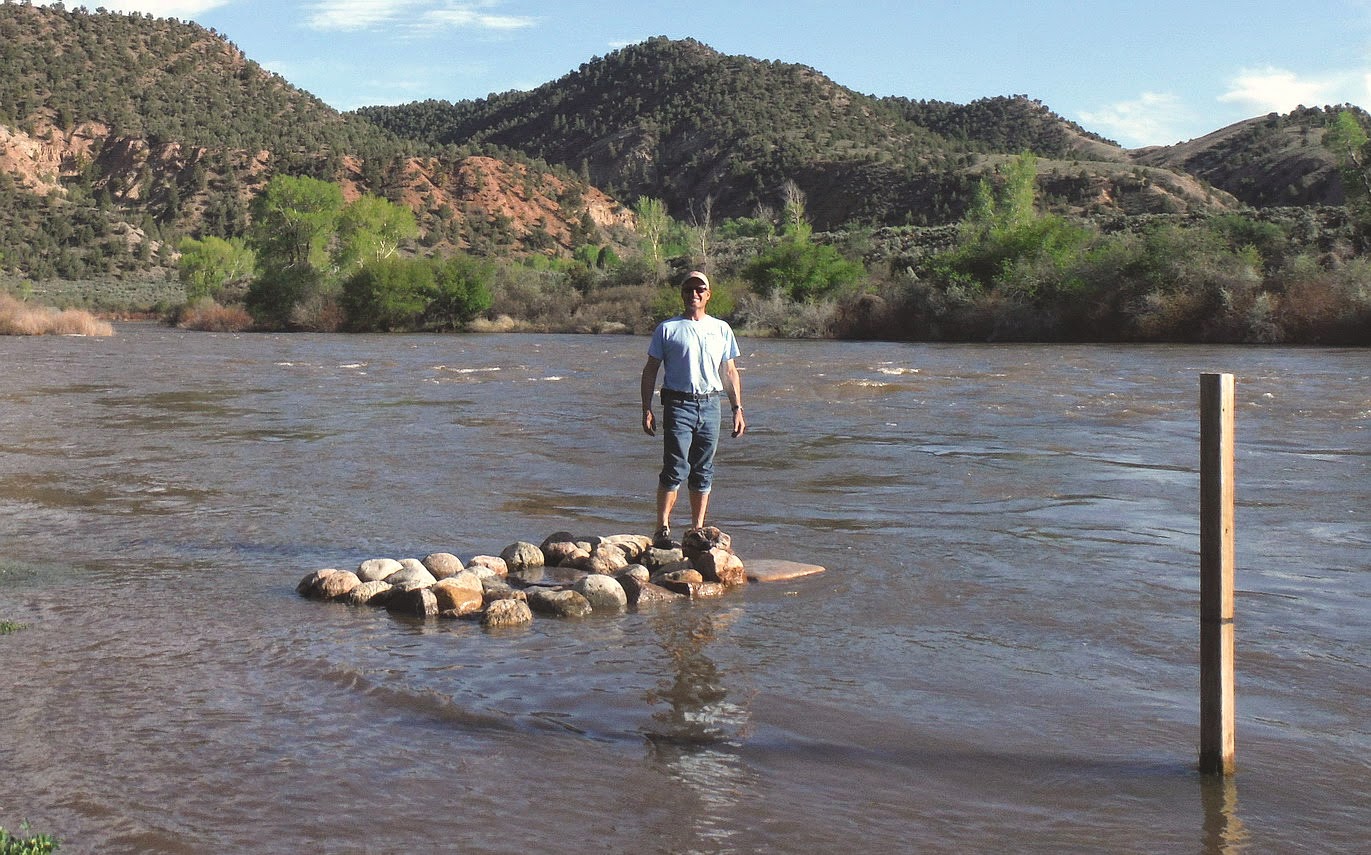 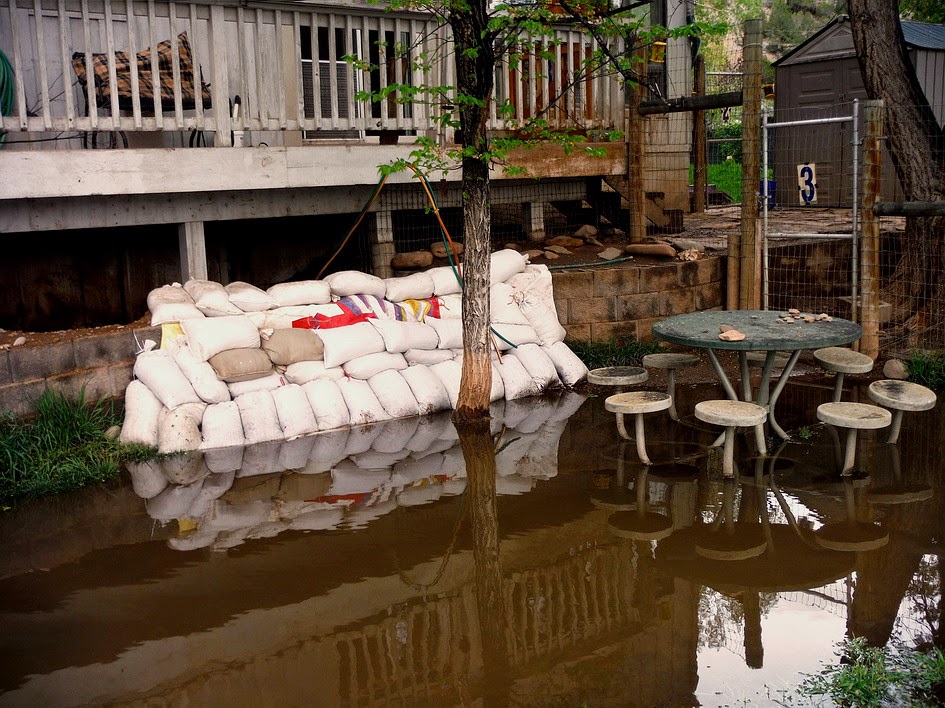 Its Memorial Day Weekend 2014, and here comes the runoff. Over the past few days the river level has risen from about 5000 to 8000 cfs, but where it will top out this year no one really knows.  In the eleven years that I’ve lived here beside the river, the 12,000 cfs we saw in 2011 is by far the highest it’s been.  In most years, 5000 cfs is about what we get. The two years since 2011 have been drought years, with only thin snowpacks to feed the runoff.  This time last year the river level was only about 400 CFS, as water managers were trying to store every drop of snowmelt they could to see us through what was predicted to be a dry summer.  It peaked at about 3,300 cfs in the middle of May.

This year is obviously very different, but so far it’s been a throwback to 2011. The May 1st SNOWTEL readings for this year had the Colorado River Basin at 166% of its thirty-year average, or the most since 1994.  The skiing has been great all year, and over A-Basin it still is (I’m going tomorrow). Even Aspen reopened for another weekend.

For the past few days,  I’ve had to do all of the same things that I did in 2011, from sandbagging the entrance to our crawlspace and setting up a couple of sump pumps, to removing everything that will float from the backyard.   Today the water level reached the bottom of the sandbags, and I had to wader up for the first time to move stuff around. It will probably go a foot or two higher in the next week.  In 2011, from this current river level and above I had to spend an hour or so out in the river every evening keeping debris off our fences, and I expect that there will be more of that this year.  There was a lot of anxiety that spring, not knowing how high the water would eventually get, but having been through this once before I’ve got a pretty good idea of what needs to be done to keep the water at bay.
It could possibly get higher this spring, but the snowpack is pretty comparable to back then.  And, water managers have a new tool in their toolbag, the permission to send more water east through the Roberts Tunnel in case the western slope needs a little relief.  Unfortunately, its been even wetter on the Front Range than here, so they might not have much room to absorb more! As long as we don’t get any heavy rains while levels are at their peak, we should be OK on the Upper C.

One new wrinkle I’ve had to compensate for this year is the little wooden dock I built in the summer of 2012.  Although the dock has only been there for less than two years, I’ve become quite attached to it. It’s a great spot to fish from, pee off of,  learn to fly cast on, or set drinks and hockey sticks upon when the river is in its winter ice rink mode. Its also a great place to just hang out, sitting in a pair of Adirondack chairs making our own little Corona commercial.  When I first built it, my wife said, What am I going to do if the river ever comes up that high again?  I told her that these river events happen only very twenty years, so we’re good for another nineteen.  Nineteen turned into three!  So to protect my dock, I covered it in rocks to hold it down.  Then when the river started rising, the water started to eat away at the banks where the dock was anchored to what used to be solid ground. So I got more round river rocks to stabilize the bank with, but whether this works or not remains to be seen.  The pictures my wife took of me standing on the dock yesterday might be the last we see of it.  (I tried to get her to go out onto it for a picture but she refused, being smarter than I am).

The Upper Colorado River is in many ways one of the most drought-proof and flood-proof rivers in the state or even the US.  Since the river is the lifeblood of the southwest, there are a lot of local, regional and even international commitments that ensure some water flowing all the time. There are several storage options upriver that can be used to manage the flow here, but all are more than fifty miles away.  Below the closest (Wolford Mountain) and here, there are numerous small streams pouring in.  Sheephorn Creek is running high, draining the Gore Range, as does the Piney, which as I write this is over 600 cfs. Rock Creek’s USGS gauge isn’t working, but I saw it a couple of days ago and it was at least a hundred. The river usually has more water in it down here than one might think, because of all the little streams between here and the nearest gauge upstream in Kremmling.

We’re likely looking at a month of this before it starts to come down.  Until then the fishing rods will stay stowed, and the whitewater gear will come out.  The section of the Upper Colorado River that I live and guide on is usually a pretty mellow section to float, with only a couple of rapids and bridges to navigate.  Once the level gets over 5000 cfs though, it’s a different story.  The sheer volume of the water creates numerous fun waves and wave trains, and the whole trip from Derby Junction to my backyard takes half the time it normally does.  When river levels rise so does the speed of the water, which is why a river’s height doesn’t double when its cfs does.  CFS is a measure of a river’s volume and not height. Because its moving faster there is more total water volume traveling past any given point on the river without being twice as high.  Its one reason that I like to look at cfs numbers instead of the gauge height figures most USGS gauges also display.  The gauge height number will vary from one part of the river to another, depending on how wide the river channel is and the gradient.  A rise of four feet in the narrow section of Jack Flats upriver would probably be only a foot and a half at my house, where the river channel is a hundred yards wide.

One property of rivers is that when they rise they tend to go off-color, and when levels are dropping they clear. In 2011 I didn’t know if I’d still have a house to live in by summer, let alone what it would do to the fishing. Turns out that they both did just fine.  Once the river was past its 12,000 cfs crest near the end of June, it didn’t take too long to start to clear up.  I did my first fishing float that year in the first week of July, with the level still at 10,000 cfs and slowly dropping. We not only caught fish, we caught a bunch, and were those fish ever hungry!  It had been a tough two months for the trout trying to feed in that big water, and now that it had slowed and cleared up a bit they were ready to eat something. The rest of that summer the river fished great, as flows slowly diminished.  We lost our caddis hatch that year, but simply fished more terrestrial patterns than usual.  It should be a great year to fish ants, cricket, and hopper patterns.  I may even be tempted to toss a mouse pattern or two.

Another advantage to those high water conditions is that the fish tend to congregate in eddies, out of the main body of the river.  So even though the water is deeper, they are easier to find, more competitive and less wary.   This makes the fishing pretty fun, because instead of just methodically working the banks all the way down the river, you can concentrate on the eddies.  In between the eddies, the water runs fast and furious, and you can just enjoy riding the big waves and forget the fish for a moment.  It’s like a half-fishing, half-whitewater trip.  Folks in 2011 who had done whitewater trips in Glenwood Canyon and then come fishing here, said that the whitewater here was more fun than in the Canyon. (Partly that’s because commercial rafters can’t put in at the Shoshone ramp above 6,500 cfs.  Above that level, the highest place they can launch trips from is Grizzly Creek, below all the famous Shoshone drops).

One other thing that I also learned in 2011 is that launching boats from my backyard is a nasty, muddy affair.  It was almost Labor Day that summer before the mud dried much, so I did a few trips from my father-in-law’s ramp a half-mile downriver.  He’s got a nice, steady grade from the back corner of his property down to the river, one that he and I cleared and graded eleven years ago. Boats can be launched pretty easily from there no matter what the level of the river is, from 250 cfs to 12,000. There’s also a nice, natural eddy where the ramp is to make stopping there with a boat really easy.  But, having my shop in one place and my boats in another presented some logistical issues.

So this year, I was planning to move my fishing operation from my backyard to my in-law’s.  Mostly that was because my wife’s dog business and my fishing operation can sometimes be at cross-purposes.  Parking can be tight in the summer, and it’s hard to teach fly casting at the river with a chorus of dogs doing their thing for a soundtrack. (So it was also somewhat about having a quiet man cave to run off to get away from said dogs).  Now that I’ve seen how high the river might get, I’m really glad to have already set those forces in motion.  Having the business back in the spot where it was originally envisioned to be is going to be like coming full circle.

All that is making me feel pretty good about the upcoming summer, and the challenges it will present. Seeing the drought-afflicted areas to the south and west, and the flood-damaged valleys to the east, one hopes that having so much water is a blessing and not a curse.  After all, next to oxygen it’s the most important substance on earth.  But with the climate changing, it seems that most areas either get too much or too little of the stuff.  But here on the Upper Colorado River, it usually seems to be just about the right amount.