I’m sorry to tell you that Jim passed away about two weeks ago.  I guess he’ll  always be remembered as the only one who ever went swimming  (involuntarily) on one of your fishing trips.  He was seemingly in good health when we had lunch around the first of May.  About two weeks later he was feeling bad enough that his daughter took him  to the emergency room where he was diagnosed with leukemia.  He was told that it was a virulent type that required an extreme type of chemotherapy and the treatment would probably not extend his life more than a few days.  He opted to forego the therapy, went into hospice around the twenty with of May, and was gone within two weeks.

Larry,
So sorry to hear about Jim. He was one of my all-time favorite customers!  I've enjoyed all the time I've spent with both of you on my big green boat.  You don't see too many automatic reels anymore like Jim had, I'll be missing both seeing and hearing those. I've always envied the fact that you two could be best fishing buddies for fifty years.  I hope that you haven't already taken your last trip with me too, and there's only one way to fix that!
I do sometimes tell people on river trips about the ‘Only Person To Have Ever Fallen Out Of My Boat’.  I started to write you about my reminiscence of it, and as the details filled in realized that it had become a little story, or at least an anecdote.  Do you mind if I post this on my blog?  Names of any guilty parties can be changed.
Again, sorry to hear about Jim.  I'm glad you got to hang out with him recently, even if you had no clue that it might be the last.  There is going to be some interaction we have with everyone we meet that will someday be our last, whether we know it or not at the time.  I guess that's a good reason to treat everyone as nice as possible, so that the last memory they have of us will be a positive one! 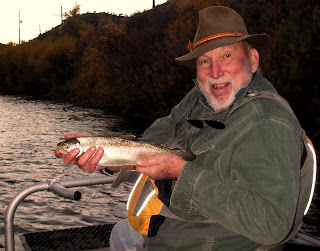 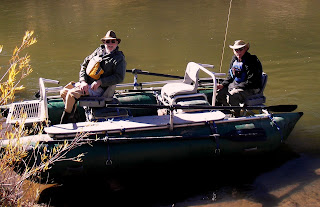 Posted by Jack Bombardier at 9:16 AM No comments:

Sitting On The Dock 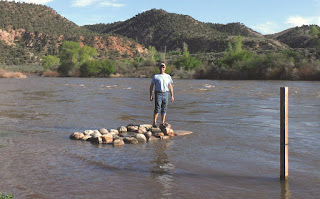 Posted by Jack Bombardier at 2:29 PM No comments:

In many mountain towns there is said to be a fifth season, in addition to the typical four, called Mud Season. That’s true in much of Colorado, but the Centennial State can also claim to have a sixth season, one I like to call Overlap Season.  This occurs when you can fish, ski or golf within the same period time period .  Overlap Season usually begins sometime in March, or can be as late as April, but this year it began in February.  The snow is still deep, the fish are biting, and the fairways are greening up.  Although I’m not a golfer, I do try to make the most of the skiing and fishing opportunities that I can. It’s an awesome time of year to live in Colorado, and makes me glad that thirty-one years ago this very month, I made it my home.
The Lower Upper Colorado River looks just gorgeous right now, low and clear and as olive as Al Pacino’s cheeks.  Water temps are up to fifty degrees, and from what I’ve seen “fifty” is the magic number in the springtime.  Fifty makes trout very, very happy.
But then your gaze rises above the water’s liquid allure, and up towards the mountains, where the pristine white blaze of perfect, pristine show shines like chrome.  That snow beckons surely as does the river, but there’s the knowledge that the window to enjoy those perfect slopes is closing fast.  To try and fool a fish?, or go carve through some aspen trees at Beaver Creek?  Hope to hold a crimson striped, spawning rainbow trout I I your hand, or hop off a cornice at A-Basin and carve a turn into some wind-deposited powder?  So many choices, and so short an Overlap Season to take advantage of!
How long the river will stay as perfect as it is now, on March 15th 2017, is difficult to say.   With the deep snowpack we have, one would expect the water managers to start releasing water fairly soon to make room for the Big Melt.  But it’s been a weird winter, one which has flipped the pattern of the past few years.  For the past several winters now, we’ve had a lot of snow early in the season, and a lot in the spring, with the middle stretch of January and early February being dry and cold, without much snow.  This season, it was awful early, with Vail and Beaver Creek opening late and the World Cup races at the Beav being cancelled due to lack of snow (and overnight temperatures to warm to make it). But then the snow finally came, and by the end of February we were looking at snowpack numbers we haven’t had since the epic year of 2011.
Now it’s the middle of the March, and not only has the snow pipeline shut off, but the short-term prognosis is for more warm, dry weather. What that means for fishing is that as long as the water in the reservoirs stays up there, the fishing should be great!  This might be the best spring fishing since we had in the drought year of 2012, with one big difference. 2012 was a drought year and though it fished great back then, the Lower Upper was dominated by brown trout.  Low water conditions that fall led to the release of 30,000 catchable-size rainbows into the river, and those rainbows and their offspring are going to be spawning this year. This spring the river has fished well, and should get even better once the bugs start moving.  So if you want to make the most of Colorado’s Sixth Season, get up here soon and make sure you pack your skis and fishing gear.  You can even put a golf bag in the back if you still have room! So please give me a reason to leave my old Volant Chubbs in the back of the Saab, and come fishing!
Jack Bombardier
Confluence Casting LLC  14503 Colorado River Road  Eagle County CO 81637 970-524-2775  Jack@confluencecasting.com


Posted by Jack Bombardier at 2:23 PM No comments: