Since I live and guide alongside the Colorado, people think that I get to go fishing all the time, but that’s not really true. I do get to spend large portions of my time watching other people fish, but they’re the ones with the rods in their hand, not me.  There can be satisfaction in telling people where to put their fly, and how to mend their line, and then a fish rise to their fly when they actually pull it off. It makes me feel like the authoritative fishing guide I purport to be. Having clients using a tenkara rod gets me a little closer to feeling that I’m fishing, since their casting distance is limited by the fixed length of their line, and the actual placement of their fly is determined as much by where I position the boat as it is by their ability to cast.  But the tug, as they say, is the drug, and they are the ones getting that fleeting high, not me.
Most nights, if I get home before dark I do grab my little three weight from its hook on the fence and try to fool some small brown trout from my backyard dock, but that’s only “fishing” in the narrowest sense of the word.  Yes I’m making casts, and the occasional mend, and even hooking a trout occasionally, but the degree of difficulty is about the same as fishing in a lake, which is to say not much.  I built a dock out on the river which not only gives me an elevated position from which to cast and mend, but I’m usually tossing out into the same bubble line to more or less the same little brown trout.  One evening I did somehow hook a big rainbow, which was as surprised as I was by the hookup and made a decent run punctuated by a single leap.  But he was the exception and not the rule, and I haven’t caught him or any of his cousins since.
So it was pleasant surprise last Sunday afternoon when I realized that I actually had a couple of extra hours after knocking off the more urgent items on my honey-do list.  Usually my weekends (if I’m not guiding) are spent running river shuttles for guys who have planned their lives better than I, and can spend an entire day on the river chasing trout and drinking beer. Not only that, but can afford to pay some schmuck like me to do their shuttle for them, instead of doing their own by bicycle or on the end of their thumb like I usually do.  But being mid-November, the river traffic had finally slowed down to the point where doing other people’s shuttles no long consumes my entire day, so I get more discretionary time to do other fun things like work on one of my five vehicles (or my wife’s four). That’s because November is also time for snow tire mounting, oil changes and other overdue maintenance.
But last Sunday there were no shuttles at all, despite the river being in as perfect of a condition as I’ve ever seen it, and I’ve spent enough time in or along or on the Colorado River that I’ve begun to grow gills like Kevin Costner in “Waterworld”.  The river is low and clear and every afternoon there are just enough midges hatching to get the trout to notice.  Usually the Colorado in my reach is not a great wade fishing river, for its banks are steep and the willows grow right to the water’s edge, and its fished much more effectively from a boat.  This fall it ran higher than usual and for longer, as downstream water commitments keeping the Grand Valley irrigated were mostly satisfied by Green Mountain Reservoir, and the Upper Colorado River was the beneficiary of that hydrological largesse.  Since Halloween, the river level has dropped to its winter flow of about 625 cfs, and it will probably stay in that range until next March.  At any level below 800 cfs the Colorado becomes a splendid spot to fish on foot, and can even be waded all the way across in spots.  And knowing this river as well as I do, I know exactly where those spots are.
Soon it will be freezing, and my backyard will extend out to beyond the water’s edge and ice skating can begin.  Over the next month, when the air temperatures get really cold at night, fog will form which coats the tree branches along the river and it makes the entire drive to work in the morning almost magical.  For an hour or two until the morning sun melts the ice, the trees sparkle in the sun and look like vertical chandeliers. 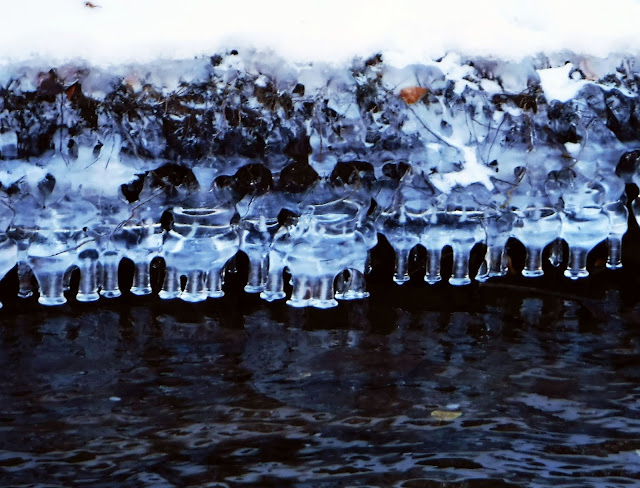 But for a short window in the early fall the river is still a river, and not a hockey rink or fantasy land of glittering ice forms, and in that time trout can still be caught.  So last Sunday after the snow tires were mounted and the gutters cleaned of leaves and the gates re-hung, there was time to go and fool a fish or two.  I tossed my fishing bag and what I thought was my ten foot three weight into my old Saab, and drove up the road before my honey could think of another do to put on the list.
First I drove up to Pinball, for there is a flat across and upstream from the boat ramp that flows at just the right, slow speed for a trout to hold in the water and let the current bring them a wriggling morsel without them having to move a fin to do so. But down near the ramp there an old Ford Explorer with what looked to be either a homeless person or someone on a very extended trip parked there.  They had all their doors open, and gear and clutter scattered all around the truck for a twenty foot radius.  I’m not sure what their deal was, but decided to move on.
Next I drove up to bathroom pullout for Pinball where there is a single campsite and good holes just above and below.  There was a 4Runner there with a guy and his black lab fishing the upper hole, so I took the lower.  This has been a good spot to fish from a boat in the past, but a bit tough to get to on foot since it involves a steep brambly scramble to get to the river, and then the aforementioned willows to snag your fly.
Years ago I had taken a family of four fishing on my big cataraft past here, and after stopping so that the wife could use the BLM toilet we had resumed our float and I offered her one of the spinning rods we had on board.  For the first half of the day, she hadn’t fished at all but was content watching her husband and two kids doing all the casting.  When I tried to hand her the rod she said, “No that’s fine, I just want to watch them” but I insisted, and said that there was a really good spot coming up and that she should give it a try. She relented, and as we approached the hole I said, “All right see that bubble line that curls around? Try to toss that lure right there, and as soon as hits the water reel it in slowly”. She did exactly as I directed with her first cast, and the little Panther Martin hadn’t gone more than a foot or two when there was a big splash and the reel’s drag buzzed a little.  She kept the rod tip nice and high as she reeled, and I made my way river right to eddy out and land the fish.  We got the brown trout in the net, and got a nice picture of her smiling flanked by her daughter and son.  After the fish was released, we got ready to resume our trip and I tried to hand her the spinning rod, but she demurred.  “No that’s OK”, she said with a grin, “I’m good! I think I’ll quit while I‘m ahead!” and so she did. She made one cast that day, and caught one fish for her effort, which made her the most efficient and effective fisherperson I’ve ever had on my boat. 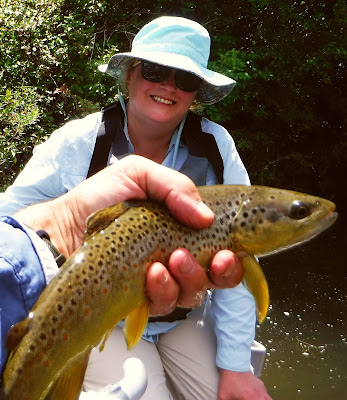 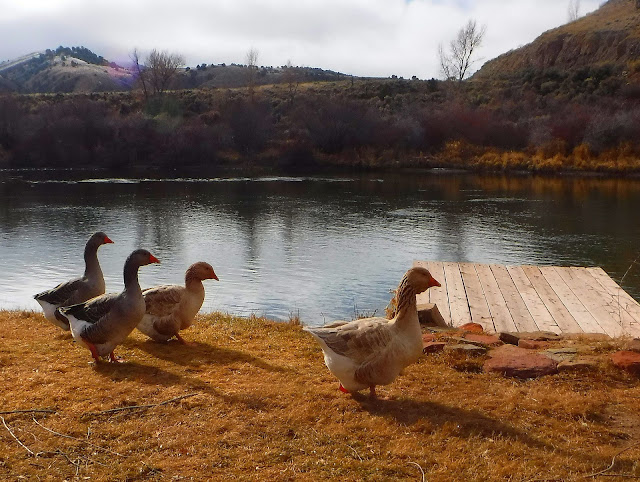 It was difficult to see the fly in the remaining light. Casting it upstream, at this time of day it usually lands into the dark shadow cast by the large rock formation across the river.  In the inky black water, a floating fly looks like a speck of light.  As the fly drifts downstream, once out of the shadow into the brighter pink water it looks like a spot of black.  I made another cast a bit longer, and heard another trout sip in the bubble line below.  Each successive cast went a little farther, and I tried to follow the progress of the fly but it was impossible now.  It might well have been Ray Charles fishing, but I just kept casting it out and hoping that a fish could see what Ray couldn’t. 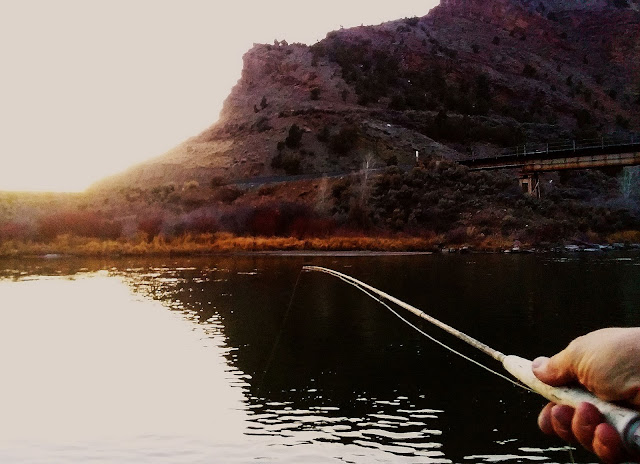 Then my eye caught some movement in the sky and a bald eagle flew past fifty feet above the water, heading home to some distant nest.  I love my backyard.  Distracted, I felt a tug in my hand, saw a small splash in the water, and got my fix, endorphins flooding my brain.  It wasn’t a big one, but except for that one rainbow, it never was.  It didn’t have to be.
The geese noticed the ruckus and began their own, now raising their wings with either alarm or delight, its hard to tell with geese. I usually drop the tip of my rod at this point to let the line slack so the fish will come off, but this time I let it swing below me towards the geese, who really got animated as the surprised and struggling fish came closer. They didn’t know quite what to make of the small trout splashing its way towards them, so they just flapped and honked in their collective mania.  When the trout got close to them, I let the rod drop and it shook the fly out of his mouth, and swam away. The geese collected themselves and swam off across the river, swearing (or possibly cheering) as they went.
So much for my Sunday fishing, I didn’t get skunked after all! The river, as always, will provide.