The 2019 Mid-Summer Report, or The Best Year Ever? 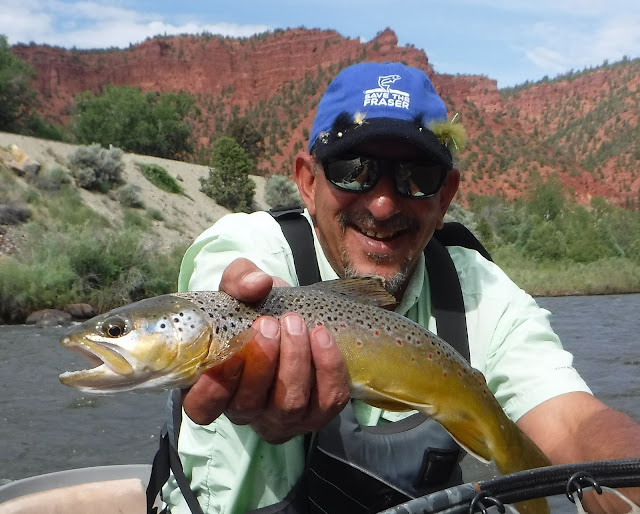 To All My Fishy Friends,

The best summer that I can recall since moving here 16 years ago continues.  Last year winter began a month early and stayed a month late, and the resulting snowpack created what can be called a true bounty of water. The Lower Upper Colorado River has run clear and cold all spring, and is only now beginning to dip below 2,000 cfs. The reservoirs on both sides of the Continental Divide filled and in some cases spilled, and all this plentiful water has been enjoyed by everyone living along the broad riparian corridor created by the Colorado.  The river pulses with life and energy and sustenance and makes one stronger just by being in close proximity to it. The water was the biggest we've seen in six year, finally topping out at 6,000cfs.  The sheer volume of the water created big standing wave trains that went on and on, the deep fresh powder skiing of whitewater rafting. 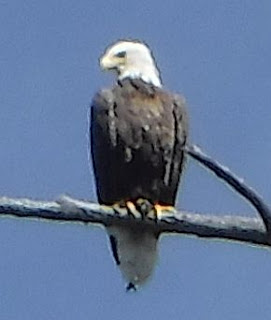 Once the water levels began to drop the fishing was excellent almost immediately. Bugs have been hatching, but at weird times.  Sometimes there were caddis in the morning, and tricos in the afternoon, which is the opposite of when they're usually around.  There were some big red quill mayflies in May and June, and we don't usually get those until August.  The wet weather has also seemed to be good for grasshoppers as well, and the fish have just been stupid about getting after those.  One day last week we were fishing some hopper/droppers, and it seemed like we were getting more hits on the hoppers than the cunning nymphs suspended below them.  Finally I removed one of the nymph rigs so my guy could fish hopper only, and when he got several strikes soon has partner removed his, too.  The result was spending most of the next hour watching trout chase grasshoppers in the foam lines, like dry fly fishing on steroids. 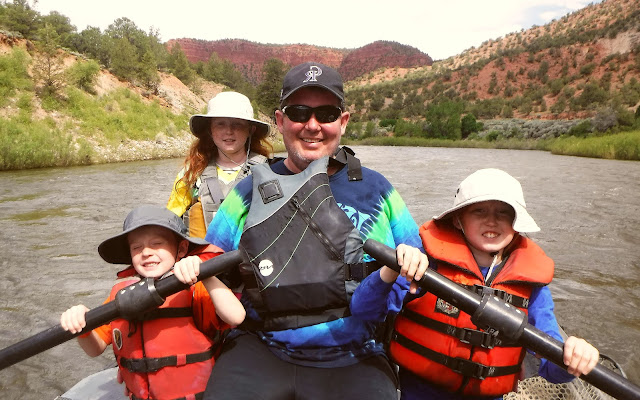 Of course  this being summer, we have lost a couple of days to off-color water, but so far less than most years.  NOAA predicted a dryer-than-usual monsoon season, and so far they've been right. But even when the water has been little dingy, there are enough hungry fish here that they'll respond to streamers.  My new favorite streamer is a yellow and gold Sculpzilla.  They absolutely crush those things.  Two weeks ago I floated with a guy who tries to make it out here twice a year. Two years ago he took his wife with him on a float during runoff to show her the spectacular canyon, and managed to catch two fish at once while casually tossing a two streamer rig.  This year he did it again, his second double while fishing with me!, which makes him Mr. Double Double. 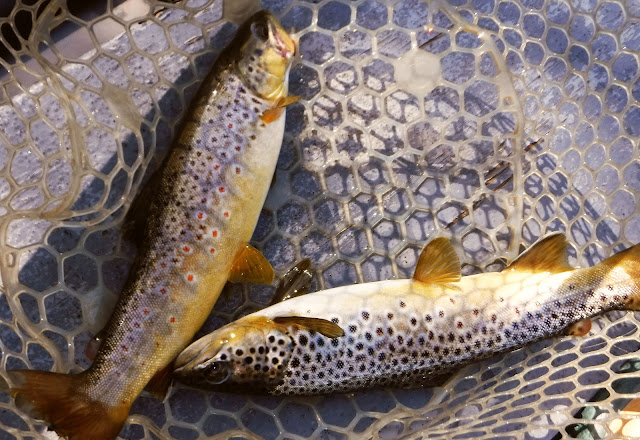 There was moment of excitement/nervousness last week, as a wildfire not far from the red canyon we float through sparked up. We were on the river that day and watched it grow from a mere wisp to a pretty substantial column of smoke.  But by the afternoon there were already some spotter planes circling around it, and the next day two regular helicopters hauling buckets were on the job, joined by a two-rotor chinook with a big straw dangling below it. On my morning shuttle run that huge chinook came roaring up the river valley just above Jack Flats less than 200 feet off the deck.  It was a thrilling sight, but there was no reason to do that other than adrenaline rush of it.  The fire was up above in the hills. But I could see why that pilot would want to do that, if I could fly one of those I'd do the same thing. 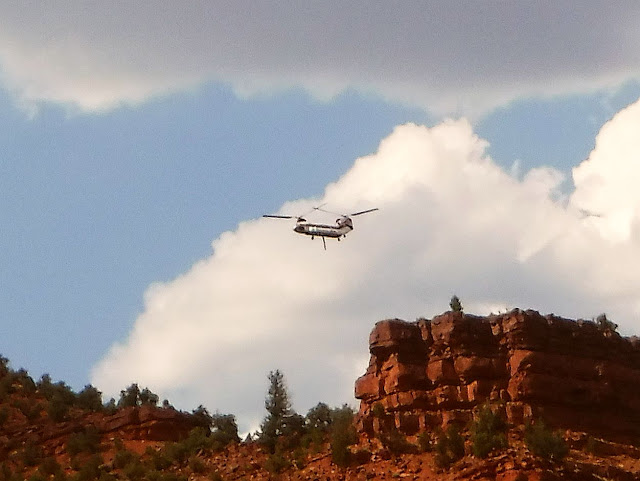 Of course there are all kind of sights one sees along the river, besides eagles and helicopters and bright, healthy fish.  A month ago my services were engaged to float two lovely young ladies down the river, not for fishing but to simply enjoy the pure beauty of the place.  They had recently graduated from CU/Boulder, and one was moving away to Oregon in a month and getting married.  They were having a girl's weekend out before the big life changes coming their way.  The girl who set it up (whom I'll call Cathy) had floated with me the summer before with her mother.  At the time she seemed a bit reserved, but since she's English I chalked it up the that.  On this trip though she showed another side, (or maybe all of them).  She was extremely beautiful, and so was her friend (whom I'll call Amy).  Cathy told me that she was thinking becoming a stripper to make some extra money, but for some reason her fiancé and dad were not keen on the idea.  Taking photographs during river floats is something that I enjoy doing on all trips, but I was really glad to have my camera with me that day.  The girls seemed to like having their pictures taken almost as much as I was liked doing it.
Then the sound of a train coming up the river could be heard, and I told the two pretty friends that it was a tradition to either moon or flash it.  This is something that I've heard of more than actually seen anyone doing myself, but since my typical guest is a sixty year old man with an artificial hip that's probably a good thing.

Amy turned to Cathy and said, "Are you going to do it?", but Cathy was already on her feet pulling off her PFD. She waved arms high in the air, and the engineer of the train blew his horn.  With one arm still in the air she pulled up her top with the other, and that caused the engineer to keep blowing his horn hard all the up the river.  Unfortunately he had a better view than I did, since all got to see were Cathy's shoulder blades, but that was still better than the aforementioned usual view I have.
About an hour later I heard the Amtrak train coming.  You can always tell the California Zephyr from the freight trains because its so much quieter.
"Another train coming!"' I announced, "this one is the Amtrak"
Amy looked at Cathy and said, "Are you going to do it again?", but Cathy replied that should shouldn't since there might be kids on the train.
"Not in the front!" I helpfully informed them, and as the gleaming silver engine came into view' Cathy lept to her feet once again, favoring the crew with the some of the most beautiful scenery they'd enjoy all year.  Again came the air horn, but this time she quickly sat down and pulled her little top back on before the passengers cars came into view, lest some kids get their impressionable minds corrupted. I couldn't help but think, Man those two engineers really owe me one.  And, I can't believe that I'm getting paid to be here right now! 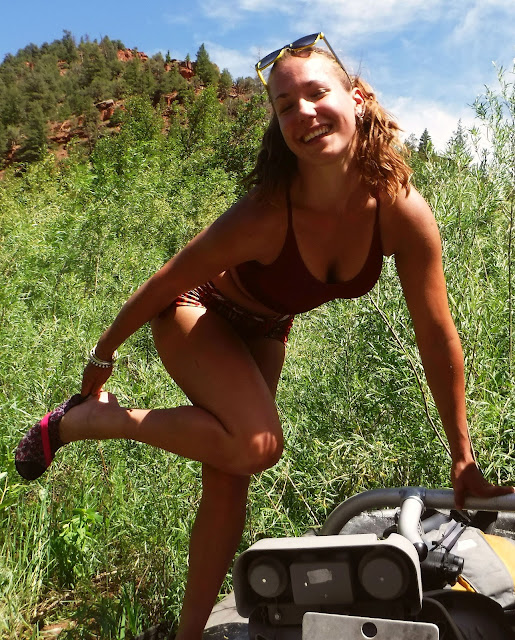 So the summer of 2019 might go down as one of the best ever along the Lower Upper Colorado River.  Big water, great weather, lots of healthy fish, and gorgeous scenery both on and off the water.  Its why people like me make the sacrifices we do to live here.

If you made it all the way to the end of this email, I hope you have a wonderful rest of your summer!