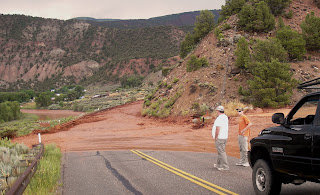 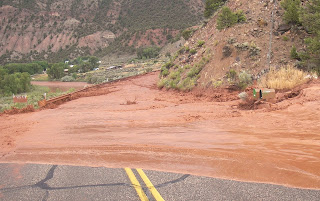 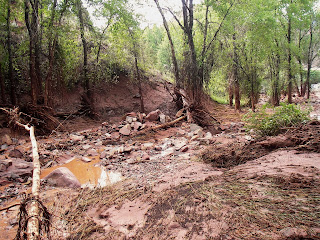 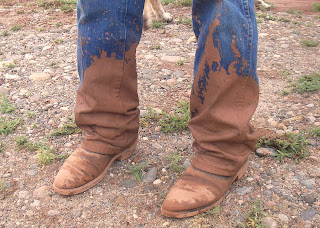 Its tempting to look at a landscape like the Rocky Mountains, and to think of them as being a finished product.  But of course we know that everything is in transition, and that nothing is ever “finished”, and that the only thing that stays the same is change.  If you’ve seen John Fielder’s coffee table book where he duplicates photos from a hundred years ago taken from the same spot today, that change is evident.  New buildings and vegetation aren’t the only things that have evolved in that time span, subtle differences in hills and ridgelines can also be seen. Canyons like the Grand of the Colorado River get carved grain by grain over the eons, a little bit at a time.  But then things happen now and then on a much quicker timescale, and big water can accomplish in hours what might take normal flows millennia to sculpt.

Such an event happened very close to where I live yesterday.  Two small creeks and a dry wash got very wet and deep very quickly, as an otherwise insignificant thunderstorm turned into a major flash flood. It was very entertaining and awe-inspiring to watch Mother Nature's creative juices flow.  Apparently, those creative juices are red, for red is the color of our immediate environs now.  Red mud covers the road, and sagebrush up to a few feet high, and guardrails and the mailboxes that didn't get dragged under by the force of it.

There were three main blowouts. One is right across from my in-laws ranch, the second at Alamo Creek near all of our neighbor's houses a half-mile away, and the third under the train tracks at the mouth of Posey Creek. Alamo Creek does have a very small perennial flow, but Posey is usually just a trickle, and I've never seen a drop of water in the wash above my in-laws.

Yesterday I had a last-minute float trip, and spent the morning getting ready for it.  As I loaded drinks and got other gear together, I watched the skies with a little wariness.  There were clouds building in the distance, but that's usually no big concern.  They do that frequently, but it doesn't actually rain or snow much down here at 6200 feet. In fact, we have some of the best weather in Colorado right here along the Lower Upper.

The customers were due at my shop at 1 pm, and by noon I noticed that it raining on Sugarloaf.  "Mount" Sugarloaf is not really a distinct mountain at all, but merely a bump on the eastern flank of the Flat Top Mountains.  It only looks big, because seen from the prospective of the valley floor, it does seem to dominate the mountains right behind it, even though it’s much lower. Rain on Sugarloaf means that there’s a good chance it will rain along the river too.  By 12:20 it did start to rain, and I called my customer’s cell phone in hopes of saving him a trip up the river in case he wanted to cancel.  I got his answering message, which meant that he was probably already on the River Road and outside of cell phone service.

My customers showed up at 12:45, just as the heavens really began to pour their guts out.  While it did we huddled in my shop, trying to decide whether to go or not.  In the end we decided to pull the plug on our adventure, but I showed them on a map how they could take the back way along the river to Arrowhead.  At least then they could see the canyon by rental car that they weren’t going to see from my boat.

They left, and I began to unload all of the gear in my boat that I had just packed up.  I was unloading one of the hatches and I began to notice a strange shhhhhh… sound coming from a distance, and getting louder.  It sounded like the river had suddenly gotten much closer, or higher.  But the river has been dropping quite a bit over the last couple of weeks, post-runoff.  Then I looked up the hill towards the River Road, and saw a sight that my eyes couldn’t quite believe.  Up where our driveway meets the road, red mud was pouring over the guardrails and flowing down the steep hillside like cross between Niagara Falls and the elevator in The Shining.  I’m sure I did a double and maybe even a triple take.  I started to head up the road towards it to get a better look, and then noticed that the river of blood was coming down the driveway that I was walking up.  I looked back at my Landcruiser and raft sitting there in what might be its eventual path, so I turned and ran back to the Cruiser, jumped in, and moved it to higher ground.  In my shop I called my father-in-law to let him know what was happening, and put on some waders and boots.

By the time I got back around to the driveway, it was red with mud although most of the flow had turned off of it.  I went up through the slippery slime to the top of the driveway, and was absolutely astounded at what I saw.  The little wash across from our driveway had what looked to be about 300 cfs of liquid red mud crashing through it, enough to float my big raft. It was coming out of a narrow gap in the hill, past my in-laws mailboxes, and across the road.  Some of it went down the driveway, but most of it turned right and downhill.  As my father-in-law Jerry and I watched, the red river went more and more down the road as large rocks and tree limbs plugged the gap under the guardrails, forming an elongated dam.  Soon a couple of neighbors stopped by on their way home, and all we could do was stand there shaking our heads at the sight.  Jerry went back to call the sheriff to let them know what was happening, and I roamed around with my camera trying to document it all.

Very soon the flow began to drop, and within a half hour had mostly stopped.  But what changes it had wrought in that half-hour!  The entire hillside from the driveway down was covered in a layer of mud. Some very large rocks which had supported the River Road had been excavated away, and rolled down the hill.  The road itself was undamaged, but its underpinnings are possibly compromised. Two of the signs advertising my fishing business were gone, though I found them later snagged in some sagebrush with one broken in half.
Recently the property below the mailboxes had been purchased, and the new owners had just carved out a small clearing for their RV the previous week. The short-lived river had followed the path he had made with the tractor, and carved out a temporary conduit for the flow.  I carefully followed the slippery trail down to the river, and saw that one of my favorite fishing holes was now doubled in size, caused by the temporary stream carving out a huge chunk of river bank.  I call this spot Last Chance Hole, because its your last chance to hook a fish just before my take out.  Last week, in three of the four trips I did we caught fish in that perfectly formed spinning eddy.  Now it had a ragged figure eight shape, and was filled with brown and red scum.

Eventually, the county emergency crews showed up along with the highway crew. They’ve been out there for the last day and a half cleaning up the mess on the River Road.  This afternoon, I went out to check on the other two points where it flooded, Alamo Creek and Posey Creek.  Posey is a little trickle of a creek that I’ve seen turn the whole river red after a good hard rain, the very definition of a gullywasher. There are a couple of guys who live there, and to get to their place you have to drive under the Union Pacific bridge that also spans the river.  Right now it’s a soupy mess, and it will be some time before its cleaned out.  Posey is still putting out a some red color into the river.

The other blowout hits a little closer to home.  Alamo Creek is where my father-in-law used to get his irrigation water before a similar storm in July of 2008.  That one blocked his headgate too, and we spent two days digging it out by hand.  Once we did, the water flowed towards his ranch once more for about three minutes, when the flow suddenly stopped.  His underground pipe was blocked somewhere in along its five hundred foot length, and no water has flowed through it since. This spring and summer he bought some replacement pipe and was getting ready to try and fix it, and now the headgate that we had cleaned out seven years ago is under is buried beneath a few feet of mud, rocks and trees.  And, the creek channel has veered away from the headgate and now runs towards our neighbors.  Its quite a mess, and there’s no easy way to visualize putting it back the way it was.  Making matters even more complicated, the headgate lies within BLM wilderness, and they’re not too amenable to going in there and fixing it with heavy equipment, which is why we had to dig it out by hand the last time.

So that’s the news from the Lower Upper Colorado, where even a minor rainstorm can turn into something memorable!  Luckily the river is still in fine shape, and its level dropping.  It fished very well last week, with the most rainbows that I’ve seen in the river since the late Eighties.  Hopefully this flood is a one time event this summer, but just plan on catching your last fish of the day somewhere above Last Chance Hole!

Posted by Jack Bombardier at 8:38 AM