Being In The Now


Being In The Now

Last weekend I attended a TU meeting in Steamboat Springs that was very illuminating.  I learned new things about the realm of trout conservation, which is what I hoped for and why I went. But I also got some nuggets to consider in terms of life itself that I didn’t expect hear, and I’ve been rolling them around in my mind for the last week.

On Saturday, I left before dark to drive to Steamboat, to make to the first morning meeting which started at eight am.  The drive between Steamboat is seventy-five of the sweetest driving miles one can do in Colorado or anywhere in the world.  First there’s the twenty miles of the Colorado River Road, and then over fifty from that across Egeria Park, with views of the Flat Tops and rock formations along the way.  It’s a beautiful drive and by the time I get to Steamboat I’m usually in a good mood.  Apparently, others feel the same, because I don’t know of any other town in America more likely to put a smile on your face than Steamboat Springs.

That morning I got to meet new people, some of whom I’ve heard of before and others of whom I had not.  Presenters got up and talked about the stream projects they had been working on, and they all seemed to be pretty wonderful people. After all, doing things to improve the living conditions of trout tend to also improve the living conditions of us all.  So indirectly, these folks might have been making some trout’s life better on some creek you’ve never heard of, but indirectly that makes your life better to, whether or not you know it.

After several TU and habitat-type talks, just before lunch a gentleman got up from the local chapter to give what I assumed would be an update on local doings.  His name was Todd, and after acknowledging the assembled audience started talking about why we fish, and what it is we are looking for standing out in cold trout water freezing our asses off. Then his talk strayed away from fishing, and towards deeper questions, such as how we prioritize our busy lives and whether or not we devote enough of that precious discretionary time to the people in our lives who are the most important to us.

It was fascinating to listen to Todd’s words, because not only did I agree with most of them but many were ideas that often bang around in my head, too. I’m fifty-four years old, but last week I was only twenty-five.  Or that’s how it feels sometimes.  Even long lives are short.  My wife’s grandmother lived to be ninety-eight, and she could remember that FDR feller the way I might recall Clinton.  So the question is, how to make our limited time count?  One idea that been in my brain for over thirty years, since reading “Zen and the Art Of Motorcycle Maintenance”, is the idea of being in the now.  “Now” means fully appreciating this exact moment in time at this very instant.  And that means everything about it, from who you are with and to what sounds are coming from the background and what the light is like and etc., etc., etc.

Modern life is always throwing so much stimuli at us that its hard to live in the right now. We’re always planning or rehashing things, or it’s the phone or internet beeping at us.  There is always something that wants to take us from now to tomorrow, or back to yesterday.

Which brings me back to fishing, and especially the fishing around here.  If you are anywhere within a hundred miles from where I write this, and you’re wetting a line, then you’re probably in a pretty nice spot.  One that’s quiet, and visually stimulating, and populated by plenty of trout if you know how to find them. This is especially true of my immediate environs.  My home is fourteen miles from the nearest cell phone signal, and the spot we launch my float trips from is twenty-two.   We spend all day on my boat floating past gorgeous scenery, completely out of contact with the rest of humanity and its distractions.  It makes it very easy to be in the moment, because even if the fish aren’t biting, it’s usually a good moment to be in anyway. I occasionally float the Eagle or Roaring Fork rivers, and both have pretty good cell service for most of their lengths. The difference is obvious. We’ll be having a good day on the boat, and someone’s phone will ring, and they’ll get out of the frame of mind they were in, for now they’ll have to make a second phone call in response to the first.  Even once the phone is put away, for the remainder of the float, half their brain will be in the boat, and the other half back in their office or kitchen.  They are no longer in the moment.

Once I was listening to a conservative Christian on the radio derisively explain that environmentalists don’t believe in God, but instead worshiped the natural world around them instead.  He said it like that was a bad thing.  But the more I thought about it, the  more I realized that he was right. I did feel more of a connection the natural world around me than I ever have to some invisible diety.  I was raised Roman Catholic with all its attendant rules and laws, most of which never seemed to make much sense. Other organized religions just seem like variations of the same theme to me.  “Do Unto Others As You Would Have Them Do Unto You”, or the Golden Rule, has always seemed like the only rule any religion really needs.  Doesn’t that really cover it all?

Some people only get to go to church once a week a Sunday.  But when I am out in my boat, that’s my church, and every workday is a Sunday for me.  Some people find natural inspiration in mountains, or on ocean beaches, or boreal forests or deserts.  I can find whatever passes for God in those places too, but have chosen to make my regular place of worship the Colorado River.  Creeks and rivers are the arteries of our planet, and their continued health is essential to the well-being of our little galactic rock.  Monitoring and promoting the health of trout in our waterways is entirely in our self-interest, as well as theirs.

On my boat, I can feel the pull of the water, and the caress and song of the wind, and hear the birds calling out to everything within earshot like a chorus up in the balcony.  It is every bit as religious an experience that being in the huge cathedral in my hometown was, and more.  For this is not a constructed place to find God, this is God writ large. It is all sacred, all divine, all a manifestation of the Big Holy Picture, and not contained in some man-made box no matter how large. To go from the zen-like repetition of casting a fly one moment,  to actually holding a trout in one’s hand the next, and feeling its life force and seeing its sublime beauty, what is that if not a kind of magic? If God exists, would he or she not take the form of this trout, instead of some dusty book?

The thing that makes my float so great is that most people, even if only for the time they are aboard, get that on some level.  The nine miles of Colorado River that I float tend to bring out the best in people, and whether they are like that or not in their home or place of work is not my concern.  The only thing worse than dwelling on your own past or future is worrying about someone else’s.  Not everyone finds the trip down the river as wonderful as I usually do, but they are in the minority.  All I can do is give them the opportunity to be their best selves, and our surroundings usually take care of the rest.

During Todd’s talk, he never mentioned the “G” word once.  What he had to say wasn’t religious, but it was spiritual.  It reminded me of an unusual performance space that was created one winter at the top of Beaver Creek Mountain called the Crystal Grotto few years ago but never built again.  It consisted of two large igloo-shaped structures formed side by side, with a space at the bottom for musicians and rows of benches for people to sit on.  Everything, including the instruments, was made of ice, which gave the spot some extraordinary acoustics. Before every performance, the man who created this space came out to tell about its construction, but then point out how ice was merely water in a frozen state.  One day soon it would not be cold anymore, and everything we could see would be gone, though not really gone.  That’s because although the ice would melt, it would the evaporate, and then go up into the sky, and fall back to earth again as rain, and fill our rivers and reservoirs. Then we would drink it or eat food nourished by that water and then that water becomes part of us and the whole cycle just repeats itself endlessly forever.  He talked about how water is life and is connected to everything, and like Todd he never once mentioned God but the message was implicit. I went to the Crystal Grotto three times that winter, and felt like I was in a sacred space each time.  The last time I went was after it closed, and roped off, and in the initial stages of its inevitable decay.  I just sat in the there, listening to a thousand little drips as it began its transformation from ice back to water.  I was truly in that moment, and if I close my eyes I can be in that moment again.

Making every moment of our lives count is impossible, but attempting to is not. I’m lucky enough to do something I love in a place that I love to be, but even I lose sight of that sometimes.  This spring, I took a famous fishing writer down the river, and I tried to describe what and how he wrote to my wife. She hadn’t heard of him since that’s not her type of subject matter. Thinking of how he got to travel all around the world fishing and writing about it, I finally told her, “he’s got the life I’d like to have someday, I want to be him”.  She snorted at this, and said, “Are you kidding? Everybody I know wants to be you!”.  That might not be exactly true, but she was right in that the life I’ve got right now, in this moment in time, is a pretty damn good one.  We all need to try and appreciate what we have and not what we don’t, and to be in the now moment as much as possible. 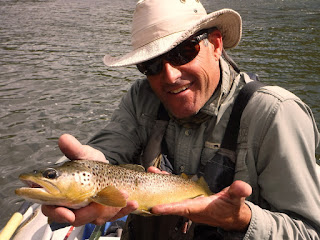 Posted by Jack Bombardier at 8:18 AM