The Big Bruisers Are Back 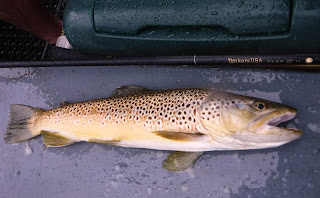 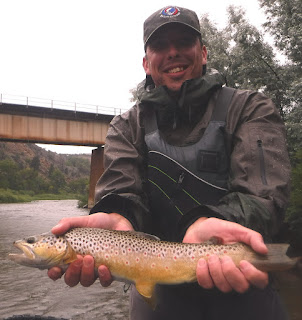 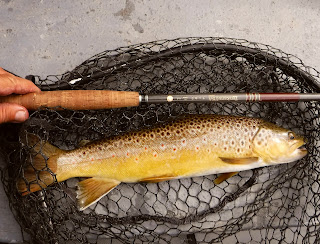 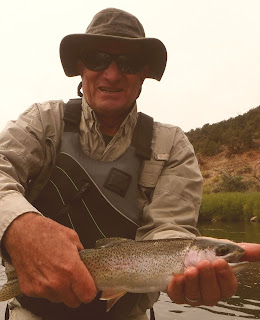 The Big Bruisers Are Back In The Colorado

The almost-perfect summer or 2016 is winding down, and with Labor Day just around the corner the peak of fishing season awaits.  There are almost no bad places to fish anywhere in Colorado in September and October, and no where is that more true than along the Upper Colorado River.  Reservoirs are near-full,  flows are high and steady and just about ideal for floating, and will stay that way until Halloween.
There were a couple of weeks in July during the monsoon flows where the river did get too off-color for fishing, but that’s pretty normal here.  Within a day or two of those events happening, the river clears up again with extra-hungry fish waiting to annihilate your grasshopper.  And this summer, one positive aspect of those off-color days occurred to me that I had never considered. Because when a river isn’t perfectly clear, it seems to keep it a bit cooler, and less sunlight shining directly on the river bottom means less algae growth.  This summer the nearby Roaring Fork River has been plagued by rampant algae blooms, in part because its runs clearer than the Colorado does.  So even though the Fork can be a safer bet to fish if its been raining, you’ll pulling up less greenery with your dropper flies and streamers in the Colorado River.

In September of 2012, Colorado Parks and Wildlife stocked 30,000 Hofer Rainbows in the river between Dotsero and the Roundup River Ranch. This was due in part to jumpstart the fishing after a major fish kill caused by a flood on Sweetwater Creek that July..  Ever since then, the rainbow populations have been doing great, and the fishing here might be the best it’s ever been.  When I moved to here in 1986, the Colorado River was primarily a rainbow trout fishery, with some browns mixed in. Anecdotally, the ratio seemed to be perhaps ten to one rainbows to browns.  Then in the late 1980s, whirling disease hit hard, exacerbated by the new Windy Creek reservoir, and by the late 1990s that ratio had flipped with browns now the dominant trout species.

Parks and Wildlife (then the DOW) began stocking Hofers above Kremmling about ten years ago, and slowly those fish began making their way all the way down to the stretch I like to call the “Lower Upper”, or the river below State Bridge but above the Colorado’s confluence with the Eagle at I-70.  As of this summer, the browns still outnumber the rainbows, but by a margin of perhaps two or three to one.  What that means is that we are rapidly approaching a fishery that’s nicely balanced between the two, and which should be close to a fifty-fifty mix by next year or the perhaps the one after.  For the thirteen years I’ve lived beside the river, the fishing has literally been better every year than the year before.

One thing the river has always had is plenty of fish, but its never been known for having lots of huge ones.  Even though the Colorado through the Lower Upper is dam-controlled, none of the dams are close enough to make the river a tailwater.  Twelve to fourteen inch browns have long been a staple in the Colorado, but it seems like this year, we’ve caught more and larger fish than ever before.  A twenty inch fish used to be rare, but this year we’ve already caught a half-dozen, with perhaps two dozen over sixteen inches being caught.

Even my backyard has become a productive place to fish. The other night, I was fishing off my dock trying to catch one of the six-inchers shooting out of the water like Polaris missiles after caddis flies, to transplant into my wife’s new hydroponics setup. Instead, I caught a sixteen-inch brown on the size 22 Adams trailing the Elkhair caddis that I was too lazy to remove.  The week before, I was doing a float trip with a father and son from Mississippi, and were having a fairly productive day, boating a couple of fish per mile throughout.  When we got to my place, the son cast a fly toward a fence that runs into the river to keep the dogs in.  The drifting hopper suddenly stopped near the fence, and he told me later that he thought he’d snagged the fence until the line began to move.  He was using a tenkara rod, and not being able to let line out,  I suddenly had to start rowing hard because now I was the line backing! Only two days earlier, a customer had hooked a huge brown up in the fast water in the canyon using a tenkara rod, and we had lost that fish.  When that fish was hooked it ran upstream, and I rowed as hard as I could to stay with it. Then the fish turned, and came straight at my cataraft shooting between the pontoons as I leapt to the front of the boat with my net.  The fisherman grabbed the leader as the fish went under, and the tippet broke off.  This time, I was determined to not let that happen again, and we went round and round in the mellow water of my backyard until the brown finally tired and we were able to bring him to the net.  After taking a couple of pictures and releasing the fish, father and son agreed that the behemoth brown caught with a tenkara using 6X tippet was the highlight of their Colorado fishing trip.

But the river was not done with its surprises yet.  We continued fishing and at the other end of my property the son caught another smaller brown, (which after the twenty-incher looked pathetic).  Our trip was almost over, but just above our takeout is a curving, undercut bank, and we’ve pulled a couple of huge browns and rainbows from it this year and last.  Just above it, the father broke off his dropper fly, and I said “Let’s go without it, and just fish the hopper only along the bank.  Without a dropper fly, its much easier to get a fly close enough to the grass for a big bruiser to see it”. As I was trimming the tippet off the bend of the hopper’s hook, the son broke his off while tossing it towards the bank.  I said, “Same thing, let’s go with just a hopper. Try and get the fly as close as possible to the grass”.

I pulled up the anchor, and we began to drift towards the grassy undercut, and both men made their casts.  Tenkara rods are rigged with a finite amount of line, and can cast only so far and no more than that. Their first casts were short, so I moved the boat closer and they cast again.  The son’s hopper was about two feet from the bank, and he said, “How’s that?”, and I said, “Cast again, we need to get it a little closer”.  He raised the fly off the water, and as he did I gave the boat a gentle twist of my oars, rotating it slightly counter-clockwise towards the bank.  This time his fly landed about an inch off the grass.  “Perfect!” I said, “Keep it RIGHT there!” With slight adjustments to the oars, we were able to keep that fly an inch off the bank all the way down.  The son kept arm extended and steady, and together for just that moment we were fishing like a unit, as one single connected entity.  He held the rod, but I controlled the placement and drift of the fly, with the oars.  I was no longer just a guide, and he the fisherman, but we were both fishing together in that exact moment.  Watching the hopper speed along the bank was mesmerizing.  The sun was at our backs and the whole scene played out as if on stage.  The grass was as green as the Amazonian rainforest, and the hopper looked as big as a hanging curveball does to David Ortiz.  What happened next was obvious, and what should always happen in a just and right universe.  A huge olive snout came up, the hopper disappeared, and suddenly the twelve foot tenkara rod doubled over as an excited expression came over the son’s face. I pushed the boat towards the bank which relieved pressure on the rod, but now we were in the faster current closer to the bank, and we sped downriver with the son holding his rod up high trying to keep solid tension on the fish.  There was an eddy behind a big rock coming up on the left bank, so I made for that.  It was a weird balance of rowing through the current, while keeping one eye on my fisherman and his quarry.  We got the boat and the fish out of the fast water, and I jumped out of the boat with my net.  The son steered him into my net from above, and with that we’d landed our second huge brown trout in less than a mile!

People who have lived and fished the Upper C for years can tell stories of the great fishing before Windy Gap altered the balance of things.  They talk of lots of trout grown fat on the big stonefly hatches of the day.  Although that was before my time here in the Centennial State, I’ve never seen it as good as it right now, both for the quantities and now the size of the fish we catch.

It seems like the Colorado River has more big fish in it than ever. I‘d like to think that its because after five hundred trips down the river, I’ve finally figured out where they are. But these are almost all wild fish, and keep their own counsel.  The river has a more powerful and infinite force than a mere mortal like me can ever hope to really grasp
A river full of wild trout is like a box of chocolates, you never know what you’re going to get. Actually, it’s better than chocolate, since its pleasures linger in the mind long after a day spent on the water is past.  Fall of 2016 is at hand, and this is usually when the fishing gets really good! If this past summer is any indication, what’s coming next should be memorable!

Posted by Jack Bombardier at 12:44 PM