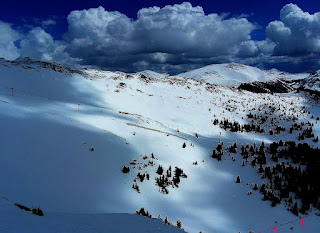 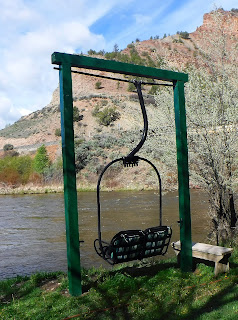 Whither The Runoff?, Or The Endless Winter


Its May 22nd, and as I prepare to take an English couple out for a scenic float today I’ve been nervously scanning the skies.  The sun keeps peeking out, teasing us with the promise of a warm afternoon, but all around up in the hills the Flat Tops are showing off a fresh layer of snow.  Yesterday Vail Pass was closed for much of the day, and the mountain snowpack (which should be melting off by now) is only growing instead.  The last month has been cool and cloudy, and as a result the above 9,000 feet it still looks like the middle of winter.


Last week I skied Arapahoe Basin, and instead of the bikini tops and shorts one might expect in mid-May, everyone was still wearing winter coats and goggles.  There were some of the best spring conditions ever, and since last even more snow has fallen there.  Beaver Creek closed a month ago, I’ve tried to make at least one high speed dash over Vail Pass per week to get some runs in. Three hours of driving for three hours of skiing is a fair trade. This season, A Basin opened some  terrain serviced by a new lift called The Beavers.  It’s a stupid name for a fantastic new place to ski. Ten years ago A Basin opened Montezuma Bowl, which increased the area’s acreage by 80%. And now this new area, which is like having one of Vail’s Back Bowls suddenly appear out of nowhere.  How wonderful to be twice surprised by a place I’ve skied for over thirty years.


A Basin also has a special place in my heart due to the fact that last summer, I was lucky enough to be able to buy a chairlift from them that was being removed in part to make room for the new Beavers lift.  It is now located only a couple of feet from the Colorado River, right in my backyard.  My wife and I try to sneak in a short cuddle there into our busy days whenever possible.  The chair is supported by a tall green frame made of 6 X 6 lumber, and attached to a pipe from which it freely swings.  As a result, its almost impossible to just sit in the chair without moving, it seems as though just blinking one’s eyes causes it to move.  Within moments of sitting in it, we are invariably set into motion, extending our legs and just swooping back and forth as if in some scenic schoolyard.  A Basin (which opened in 1947) still has two chairlifts using these exact same chairs.  The Molly Hogan lift, which is the very short beginner lift right next to the parking lot, and the Pallivicini lift, one of Colorado’s most famous, which services very steep terrain.  It is also the most direct way to the new Beavers area.  Now when I sit on my chair in my backyard, I can close my eyes and imagine that I am being whisked uphill to 12,450 feet, the former elevation that my chairlift seat used to go to three times an hour, eight months a year.  And when I am on the Polly lift, closing my eyes immediately transports me right back into my yard again.  Two of my favorite places on the planet now have this bond which pleases me to no discernable end.


Its definitely been a ski season to savor, maybe the best I can remember in my thirty-three years of living in Colorado. The cold weather came early, and the river running season was over by the first week of November.  Ice formed along the edges of the river then, and just kept building rendering the boat ramps unusable.  I kept thinking that the early ice was just a fluke, but river ice doesn’t lie.  Meanwhile, Beaver Creek ski area opened a few days early, which they had never done before.  It stood in stark contrast to Thanksgiving of 2017, in which the Beav opened late, and didn’t really have decent skiing until Valentine’s Day.  In many ways, 2019 has been the anti-2018, and that trend continues. This past winter it snowed early and often, and here it is in late May and the snow keeps coming!


Coming on the heels of the year we had last year, this is all good news.  This is exactly the type of water year we needed to get our reservoirs filled back up. The news is even better in the southern part of the state.  The San Juans had an even worse water year in 2018, but this year they got even more snow than in the central and northern mountains of Colorado.  Having the snowpack melt slowly like its been doing is also a best case scenario in terms of collecting and storing the water than otherwise might just run off to Lake Powell.  Of course this water will end up down there anyway eventually, but a slow runoff means that the water can be released in a controlled, regulated and optimized fashion. Since the Front Range takes about 70% of the water that would otherwise flow west in the Colorado River Basin, that’s good for both sides of the Continental Divide.


Memorial Day weekend is only a couple of days away, and the skies are supposed to be finally clearing. This should trigger the runoff, and so by this time next week it may all be a very different story.  Back in 2011, when we had a similar snowpack, there was one week where the Colorado River went up 1,000 cfs a day for several days in a row, finally peaking at 12,000 cfs.  This year, the river did get up to 2,500 cfs a month ago, then dropped to 1,500 over a two week span, then crept back up to 2,500 again, and is currently sitting at 2,200 cfs. Its made for a slow month for my fishing and shuttle business, as the river has been in this in-between mode where its too high to fish and too low to get the whitewater crowd excited.  Plus, who wants to camp in a 40 degree drizzle?


This all bodes well for the coming summer.  Even if for some reason the wet pattern we’ve been in just shuts off completely, that big layer of snow sitting above 9,000 feet is like Bill Gate’s bank account only in water form. By the end of June, all of Colorado’s reservoirs should be full or close to it, which gives us some breathing room should 2020’s weather patterns revert back to what we had in the summer of 2018.


Since most of you receiving this are on my Fishing Contact list, there was one positive note to the lousy water year we had last year that might reap benefits this summer.  Low water years are generally good for the young rainbow trout born those years, since they are not having to deal with heavy flows and debris.  So the ongoing revival of the rainbow trout that started here with the one-time stocking of Hofers in 2012 might just get an additional shot in the arm.


One final note to close spring missive is too mention that I had a small segment in a story that Channel 7 News from Denver did about cloud seeding. Cloud seeding is something that I have a usual relationship to, since it touches my life in several different ways.  First, I have a cloud seeder on the hill above our house, part of a network that stretches across Eagle County in a semi-circular pattern financed by Vail Resorts.  These stations are arranged, coordinated and managed by a third party who direct the various station operators  when to operate, based in local climactic conditions.  How much additional precipitation falls due to the seeders running is still subject to some debate, but the consensus is that it adds some.


Secondly I work for the local independent propane supplier who provides the fuel that runs the cloud seeders, so I know where they all are.  (One of them requires backing my bobtail propane truck backwards around the slim, curving track of Beaver Creek’s snowmaking reservoir for about 400 feet with steep drop-offs on either side). Thirdly, I am an employee of Vail Resorts, driving their on-call mini-buses for fun, profit, and a ski pass.  The better Vail Resorts is doing, the better it is for everyone in Eagle County, directly or indirectly. Lastly, as a river guide my livelihood is just as dependent on that snowpack in August as it is in February, perhaps even more so.


The one potentially negative concern I hear about cloud seeding is the idea that if we are “taking” water out of the sky that might have fallen elsewhere, it deprives other places of precipitation they might otherwise have gotten.  In effect, “stealing” their water. Its something that I’ve often thought about most myself, and many places this might well be true.  But in Colorado, where 80% of the water falls upon the Western Slope and 80% of the population live to the east, we have a rather unique set of circumstances.  Here we have the infrastructure to collect and manage that water in a way that it benefits both sides of the Continental Divide.  In a year such as this, with horrible flooding in the midwest, keeping the water here closer to its headwaters sitting safe and sound in big mountainous buckets for later release is the best possible thing to do with it. With apologies to Vail Resorts, I really don’t care that much if the snow falls on the Golden Eagle run at Beaver Creek, or some remote creek I’ve never heard of.  As long as it falls somewhere upon a western watershed, every extra drop of that water has the potential to be put to its most beneficial use, whatever and wherever that turns out to be.


So if you’ve ever been curious about cloud seeding, Channel 7’s story is pretty good primer. I will also note that although I might have accidentally said an intelligent thing or two on the river that day, the one comment I did make might have slighted employees of a major American fast food corporation.  If so, I sincerely and genuinely apologize. I would never want to impugn anyone doing good, honest, hard thankless work, for short dollars.


The link to the story is at, https://www.thedenverchannel.com/news/360/360-should-we-have-more-cloud-seeding-in-colorado .


I hope everyone reading this has a great summer, and that you are lucky enough to make it up here this year!

Posted by Jack Bombardier at 10:16 PM